Will A Decent Democratic Candidate Please Stand Up?

“The Democrats could beat him if they had a decent candidate.” That was the conversation I overheard from a group of four guys talking politics.  Neither of them explicitly said they were Republican or Trump, supporters.  I assumed they were because neither of them offered any suggestions or comments on any of the Democratic candidates, at least that I was able to hear. The conversation got me to thinking a few things. One, what is “decent.”  Two, who I’m I supporting in the democratic primary. Three, none of the bullshit Trump has done is disqualifying enough for them to consider any current Democratic candidates decent. The kids in cages; the family separations; the requests of assistance from Russia, Ukraine or China, the violation of the War Powers Act; the grabbing of pussy’s; the Helsinki debacle; the Charlottesville comments; the blatant racism; the all-day, everyday lies, nor any of the dozens of acts within the endless circus that would make anybody else indecent seem to matter to Trump’s base, yet, they see others not worthy of the office?

I wish I could have overheard these guys’ critique of the democratic field. I really am curious about what they thought of the candidates and what they considered ‘decent.’ Does decent mean someone that they would consider voting for? What flaws of the current Democratic candidates are more disqualifying than the flaws that Trump has and continues to display on a daily, no, hourly basis?

There are, I think at the close of 2019, 18 Democratic candidates for president.  That’s 18 remaining.  As we begin the election season. My guess is that the number will be reduced, substantially, quickly. Let me go through a rundown of the candidates and give what I see as the pros and cons of each, maybe the cons would be what Trump’s base, and maybe Democratic voters would see as “disqualifying,” maybe?

The con for Biden is his age. Biden will be 78 at the inauguration. The country has moved past a 78-year-old white man, no matter how liberal he may think he is. Not everybody has the mental and physical dexterity to be president at 78. We don’t know whether Biden has it or not but it is a question that should be considered. Biden doesn’t have a reputation for lying all-dad, every day, does he?

Sanders. I really don’t see a pro for Bernie other than, he’s not Trump either!. But, that’s just me. I do see a con or two. Bernie is a self-admitted socialist.  That’s how he’s running.   Irrespective of the flaws that exist with capitalism, the country isn’t ready for a socialist agenda it’s a losing strategy, right?  I know he’s got a big following and it has grown since 2016 but, it was a losing strategy in 2016.

Also, Bernie is older than Biden.  He would be 79 at the inauguration.  He’s already had a heart attack during this election cycle.  Not saying he can’t handle it physically, but. The other thing.  All these rumors about him groping and sexually assaulting women. Oh wait, that’s not Bernie and that obviously wouldn’t be a con if it were Bernie, right? 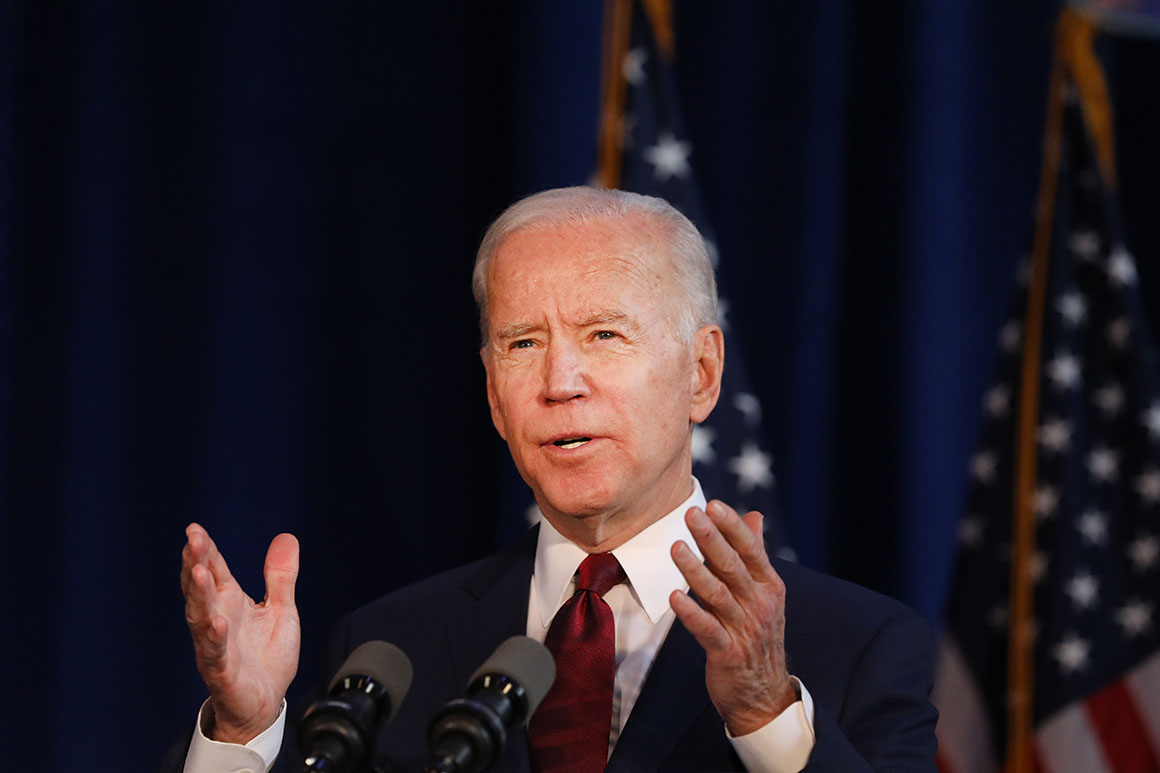 Endangered Democrats sound the alarm on Bernie and Warren
Vulnerable House members are rallying behind Joe Biden, looking to head off a liberal nominee they fear would cost them reelection, sources told POLITICO.

Warren, like Bernie, I really don’t see a pro for her.  She’s cut from the same cloth as Bernie. Her candidacy is centered on the redistribution of wealth.  I just don’t see that as a winning strategy.

Warren has pretty much the same cons as Bernie, except she is a bit younger. She’ll only be 71 at the inauguration. And, the other thing. Her willful defiance of the constitution and the rule of law is a deal-breaker, right? Oh, my bad. Confused again.  That’s not Senator Warren.

For Buttigieg, a pro, I guess, is he’s only 37? Is that too young? Perhaps not if you consider he’s incredibly smart; although, smart is not a substitute for experience.  Being mayor of South Bend doesn’t necessarily give you the experience needed to run the country.  “Experience” is not a constitutional requirement although it should be a consideration.  Look what we have now.

Mayor Pete’s biggest hurdle, after his age, might be his sexual orientation.  I don’t mean to piss-off the LBGTQ community but that’s a real hurdle Mayor Pete is going to have to overcome.  There are a few media outlets that will be bold enough to bring this up as a challenge but the media is not the problem.  Its southern, conservative, black and white voters. It should show in the polls but not everything is going to be revealed in a poll. He’s gotta win the primary. Look, race or ethnicity is an issue for Booker and Duvall, whether anybody mentions it or not.  Trump got elected largely by leveraging racial and other social issues.  As Mayor Pete becomes more of a factor, so will his sexual orientation.  We can’t be in denial about things that will be used to divide us, further.

And the other con for Mayor Pete would be the potential violations of the emolument’s clause of the constitution.  How would he handle the illegal, self-dealing that is going to go along with him being president?   He won’t have that issue you say? Why? Oh, because that is an issue for the other guy currently holding the office that apparently has no flaws.

Bloomberg’s billion dollars, is that disqualifying or is that a pro? He’s got enough money to buy name recognition but will that get him the nomination? Southerners overwhelmingly voted for Trump; a New Yorker, because he appealed to their racist roots. Bloomberg has more of a northeastern accent than Trum but what is Bloomberg offering? An alternative? Experience?

Bloomberg has run a major corporation and been mayor of the largest American city. He’s got baggage from his time as mayor of New York that I’m not sure his money will help him overcome.

Oh, and by the way, Bloomberg would be 78 at the inauguration but with the help of foreign countries, I’m sure he can overcome the age thing. Did I confuse him with the other New Yorker who absolutely cheats at everything? Oops!

Steyer has buckets and buckets of money too but I’d bet $10 that no one other than political junkies would be able to pick him out of a lineup. Steyer would be 63 at the inauguration.  That’s a plus. We don’t know enough about his cons because we don’t know who he is, I mean other than the support he has given for putting kids in cages and separating them from their parents.  If you look past that, he’s okay. He’s claiming that’s not him. He’s blaming that on Trump. Yeah, right.

Duvall, theother Johnny-Come-Lately, is the former governor of Massachusetts. By all accounts, he did a “decent” job as governor and has been successful since leaving office.  He cockily jumped in the race at the last minute.  His arrogance is kin to the arrogance Bloomberg has shown with the, ‘I’m dissatisfied’ with the other candidates rhetoric.  Duvall would be 64 at the inauguration and that’s a plus.

Duvall is African-American. Race matters.  That’s how we got Trump. I doubt Duvall will gain any traction because of his lack of name recognition, his arrogance and oh yeah, his race. All the things he did wrong in the last administration was just ‘bad for the country.’  Oh wait; that was the other “black guy.”

Williamson, Marianne, I feel obligated to use her first name. If by some miracle she were to win the nomination she would be 68 at the inauguration.  That’s her only pro. She’s a cuck. Not trying to be mean but she showed her flower-power cockiness during the early debates.

Klobuchar, Senator Amy Klobuchar, is interesting.  She checks all the ‘pro boxes,’ age, experience, temperament (I think). There are no glaring cons except name recognition.  She would be 60 on inauguration day.

The country is ready for a woman president.  Hillary Clinton’s breaking the ‘glass ceiling in 2016 is evidence of that. Had it not been for Russian interference and Jim Comey we would be talking about the 2nd woman president or at least the second term of the first woman president?  But for her illegal dealings with her foundation her refusal to disclose her tax returns, could be the nominee.  What was that? She did disclose her tax returns and her foundation has not been investigated? Where did that come from?

Does Booker check the boxes required to be classified as a “decent” candidate? Experience and age are non-issues.  He would be 51 on inauguration day.

Booker, of course, is African American. As I mentioned regarding Duvall, race matters.  It shouldn’t but be honest, it does. Is the reason Booker hasn’t gained traction because of race or is there something else missing?   Maybe it’s the way he cozy’s up to dictators or authoritarian leaders, like Putin or Kim Jong-un? That’s what’s disqualifying and the reason he can’t gain any traction.  Is this the reason he’s having problems raising money for his campaign?  Oh, he wasn’t in Helsinki dissing US Intelligence agencies?

Michael Bennett. I use Bennett’s full name because if I put just Bennet, would you know who I was talking about? If I put Michael would you assume Bloomberg? If you Google Michael Bennet, the football player comes up. Do you know he is a sitting Senator, from Colorado?  Not the football player, the other Michael Bennett. Oh, he would only be 56 on inauguration day. His relationship with Jeffrey Epstein can’t help him now. What do you mean he barely knows Epstein?

John Delaney. Who? He is indistinguishable from Bennet, except he’s a former congressman from Maryland.  He would be 57 on inauguration day should he be elected.  I’d bet $2 you couldn’t pick Delaney out of a lineup that included him, Bennet and Steyer. His whole stick that the world is flat and that climate change is a hoax is disqualifying. Delaney does believe in climate change. Who knew?

Yang. is there anyone that takes him seriously? I get everyone knows he’s promising everybody $1,000 per month as guaranteed income. If you didn’t get that from the debates, there probably not a reason to add more about him here, other than he would be 46 at inauguration day.

Since Yang is pretty sure he’s not going to win, he’s negotiating a business deal with Russia to build a Yang Hotel in Moscow.  I mean, at the end of the day, he’s a businessman.

What do you mean it’s not a Yang Hotel, it’s a Trump Hotel?  Stop lying.

Tulsi Gabbard would be 39 at inauguration day. She’s a sitting congresswoman, the only person in Congress that didn’t cast a vote for impeachment. She voted, “present.” In probably the most consequential vote in Congress of the decade, she voted “present?”

There’s more controversy surrounding her that is probably not appropriate to discuss since it’s more conspiratorial than fact so let’s not say more.

Julian Castro dropped his bid for the nomination as I was putting this post together.  Too bad. Had he had the money; he could’ve made noise up to the Democratic Convention?  The same could be said for some of the other candidates, who dropped their campaigns, namely Senator Kamala Harris. Does the inability to raise money say more about the legitimacy of the candidate or the legitimacy of our process for selecting candidates?

Irrespective of the qualities of any of these Democratic candidates, have they done anything or said anything more disqualifying than Trump has done in life or as a candidate or as president? What makes him more “decent?” For goodness sake, Trump has been impeached for soliciting a bribe from a foreign country! What gives?

Vote Blue, No Matter Who